Greetings from the Shanghai EXPO part 3

Ni hao. Today is the final show of the Dancing Moominvalley at Shanghai EXPO. What a thrill the whole trip has been! Over two thousand people have already seen us on stage and on different events including the concerts, workshops and other stuff we've offered them, so after today's performance it will raise up to three thousand. That's something huge!

We've been in Shanghai and Hong Kong media, number of Chinese web magazines, and the EXPO organisation has given us the highlight position on their own event calendars three days on a row which is extraordinaire.

We'll give you the photos and other stuff including links next week, tomorrow we'll enjoy the well earned day off in Shanghai as the plane takes of early on Friday morning and takes us back to Finland.

Tunnisteet: EXPO, in english, on the road 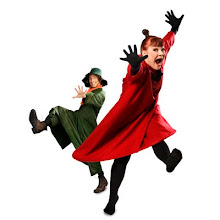